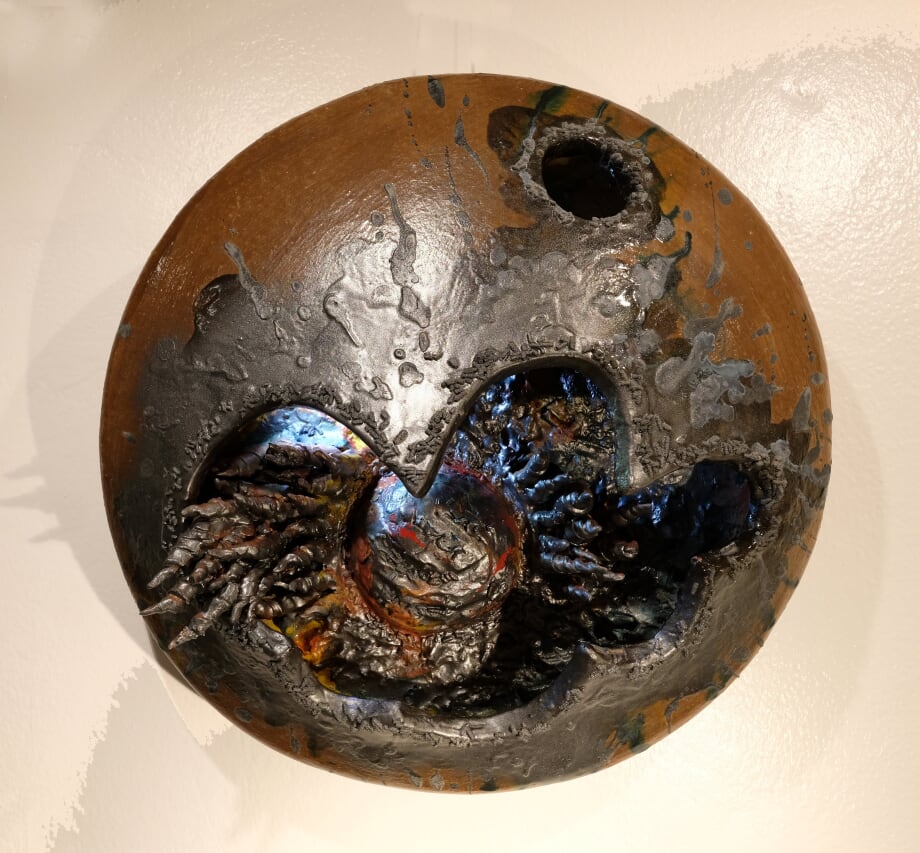 When we see the works of the master Paolo Giallombardo, the thought inevitably follows the great artistic season of Albisola, which defined the town which is called the "Athens of Liguria".

He proposed us two plates from the series "Mondo", with relief elements, copper and glass castings; and the sculpture "My World", refractory, enamels and castings: the latter a true masterpiece, which I would insert, with the appropriate "distinction", in the "spatialist" current of the great Lucio Fontana, because from a long open gash of the abstract surface you can see (and not imagine, as in Fontana's "cuts") expressive elements that refer to a "mundane" content, lyrically synthesized and transfigured.

A work of the type that "leaves an impression".

Gold and Fire in Art

On entering the study of Paolo Giallombardo, you discover a kingdom of wonders. Completed or sketched pottery, mythological, poetic, real and however enchanting subjects emerge from the numerous corners of this strange albisolese workshop.

Of great magic are the huge orbicular ceramics by Paolo Giallombardo, which are dedicated to the ancient pre-Columbian civilisations, in a triumph of golden temples and flickering flames.

Recent is the inauguration in Monastero Bormida of one of his works in honour of the Alpini of the "Acqui" Division fallen in Cefalonia and Corfu.

Then there are the cribs, in an unmistakable atmosphere of tenderness, with a world of humanity that travels the infinite roads of hope, towards the Cave, the center of Love. Men and women come to life under the moving fingers of the artist and, almost in a caress, a soul is impressed in each of them.

The "Grotte" become a world in themselves, a world of yesterday and today, within which all the passions, anxieties, torments, yearnings and drives that accompany every creator, who needs to welcome a light into their own inner world can be enjoyed. Then there is the golden star that shines, in sublime joy, on the Nativity. 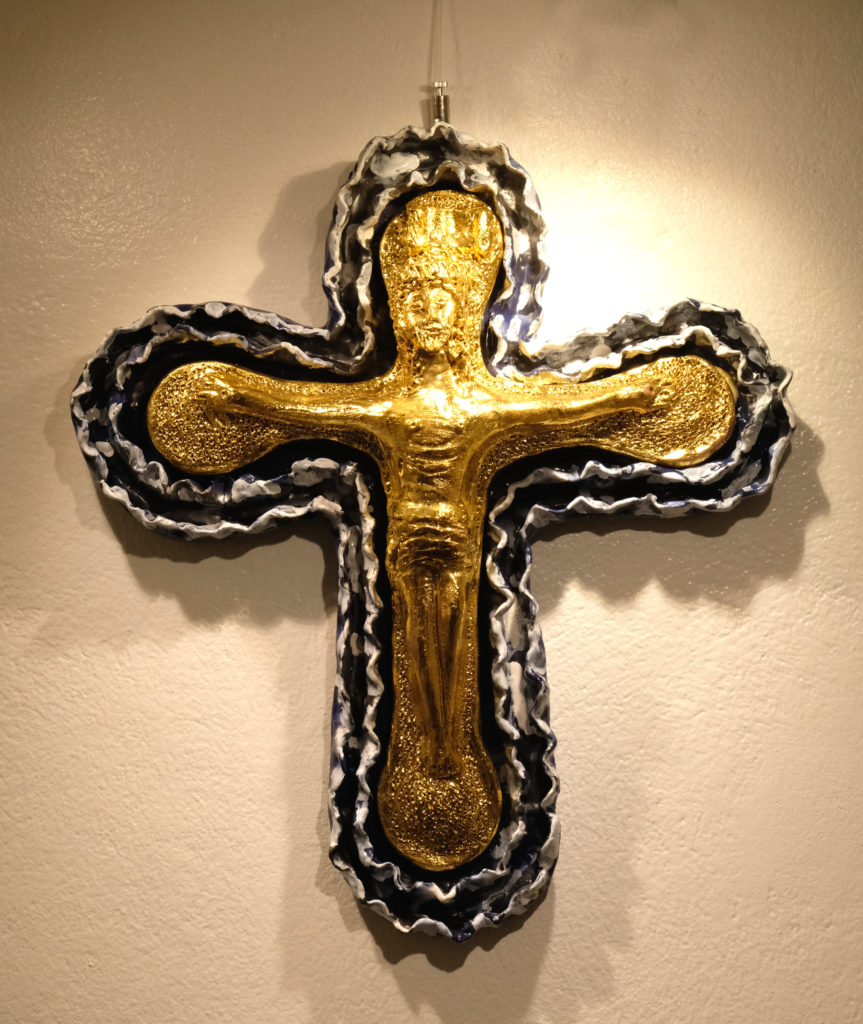 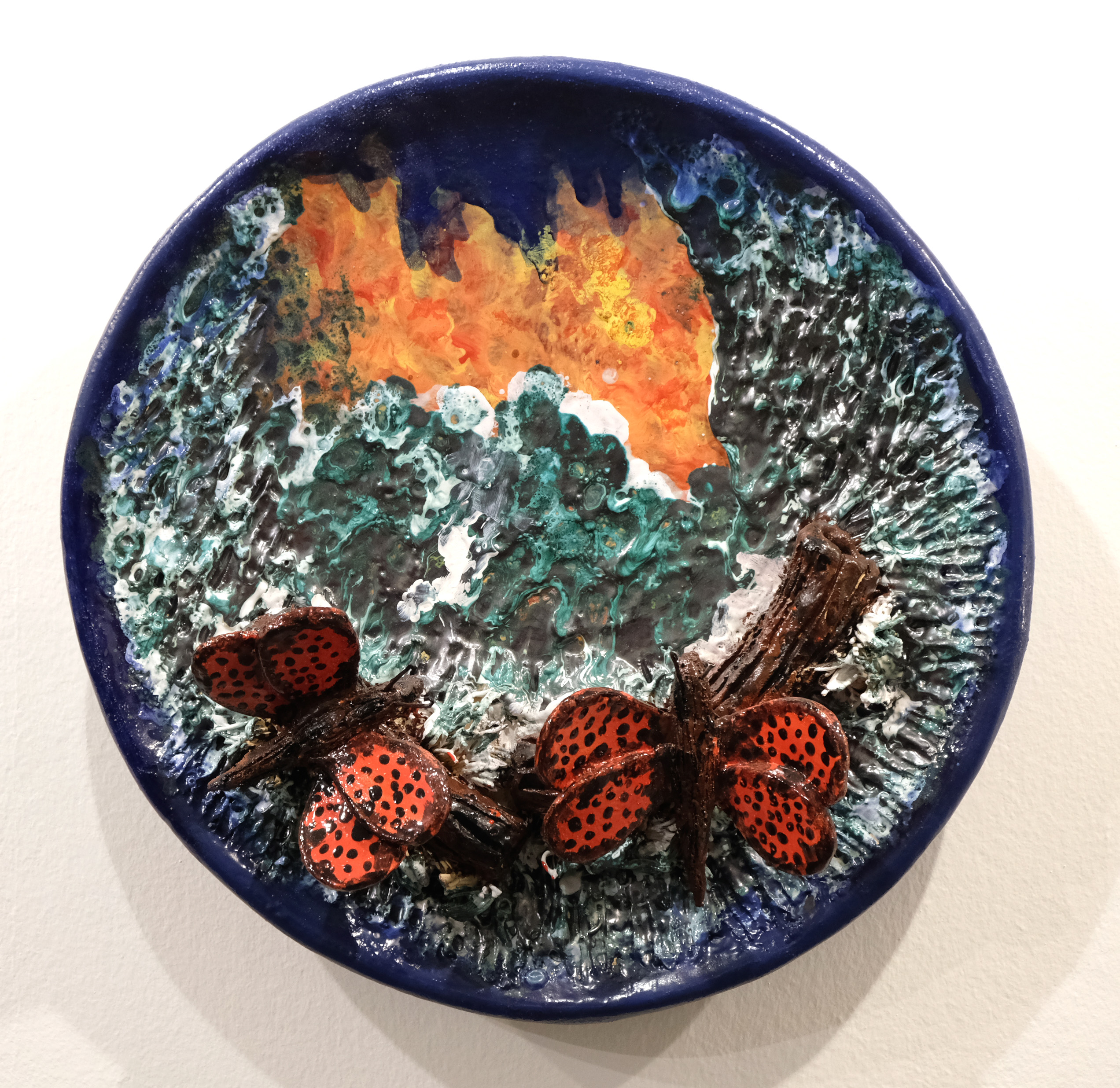 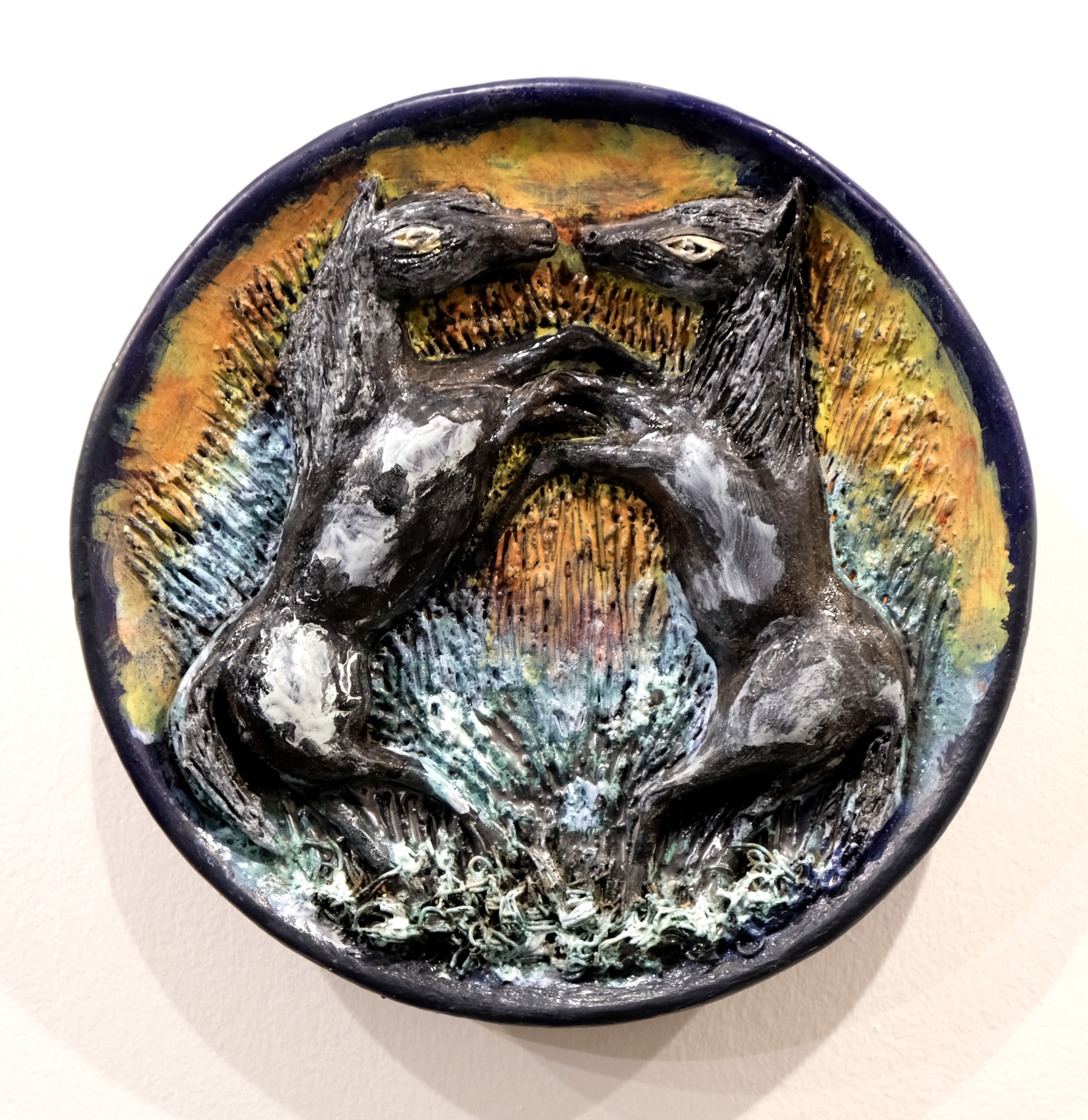 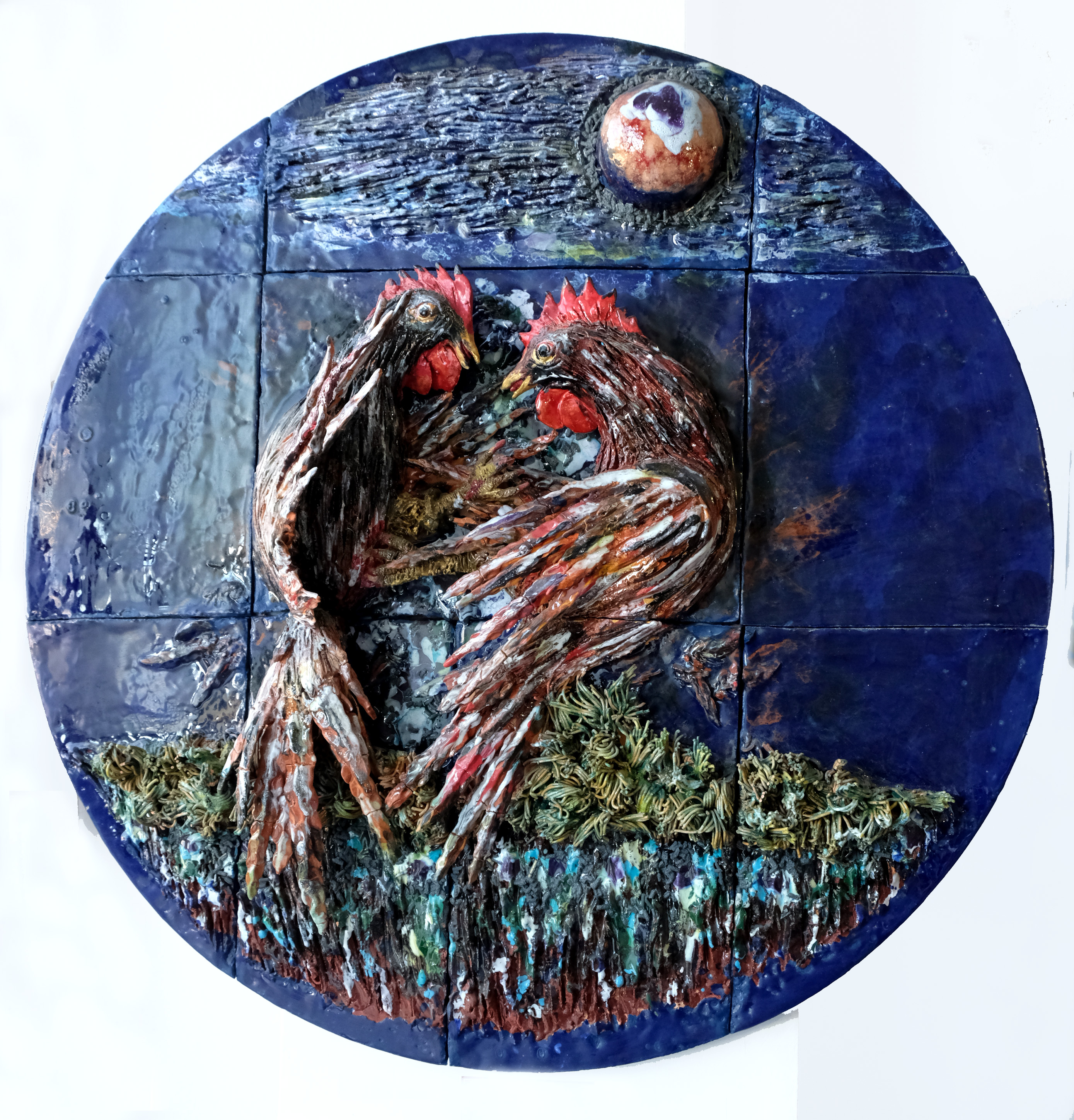 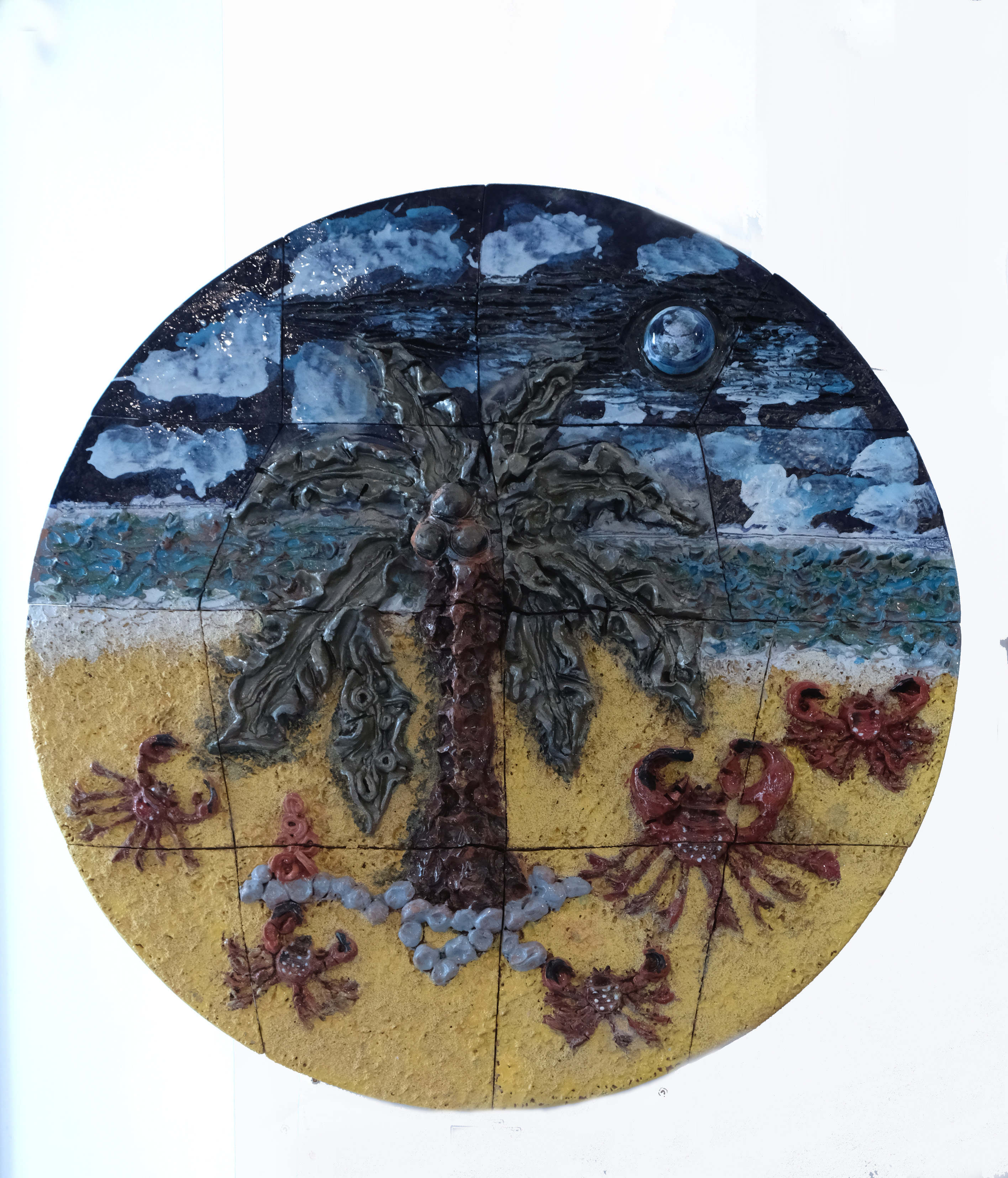 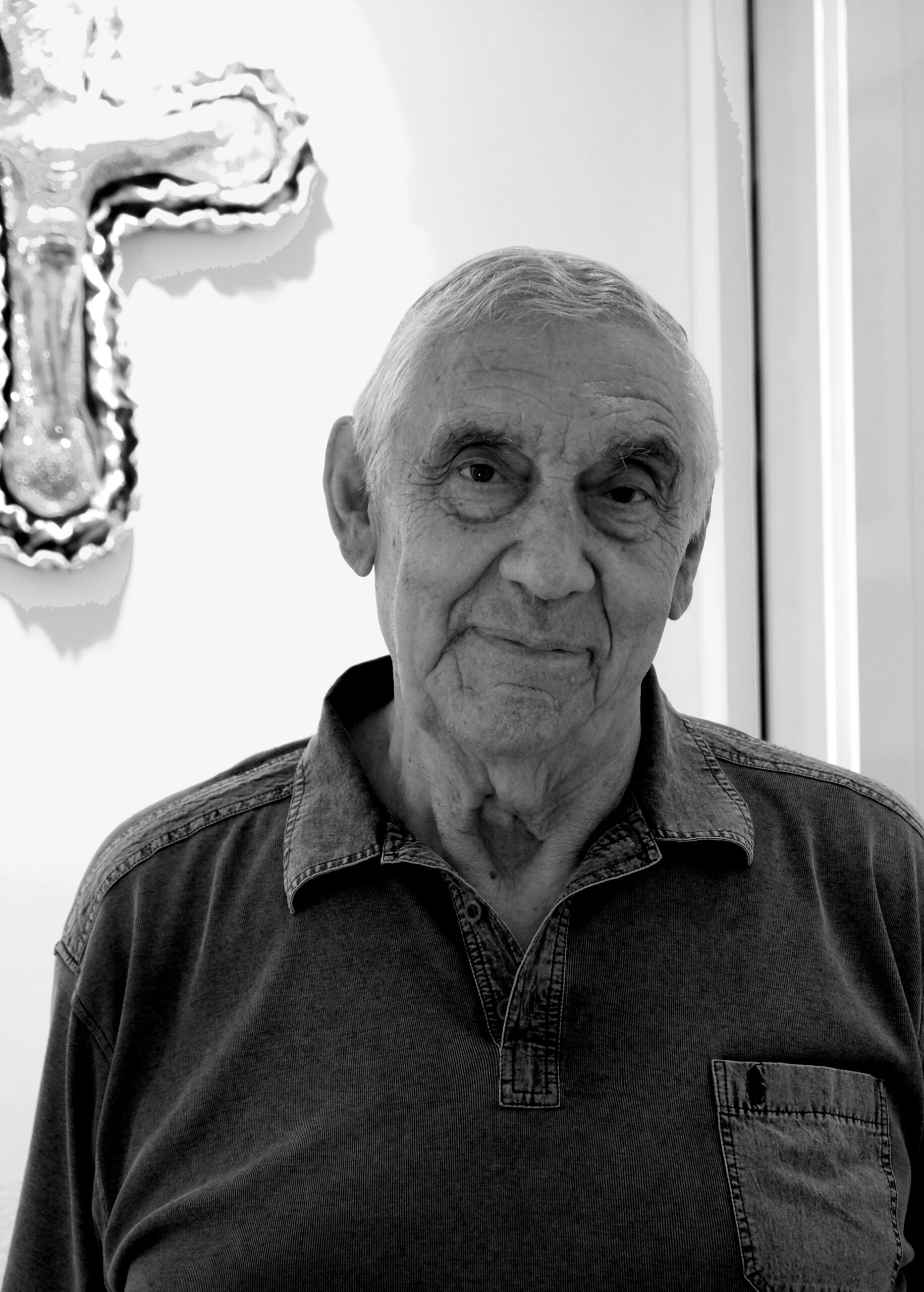 Paolo Giallombardo, an artist of the Albissolese tradition, began his career working with the great ceramist Eliseo Salino, his first teacher; between the fifties and sixties, again in Albisola, Giallombardo got to know and frequent Giovanni Poggi, owner of the “Ceramiche San Giorgio”, Vittorio Agamennone from Verona, the Florentine Becheroni and many other of his colleagues.

These influences are deduced from the artist's style who recalls his youth through the representation of images of birds, courtyard animals, and the characters of the Nativity scene that constitute one of the great traditions of Albissolese ceramics; his creativity, however, does not stop at simple recollection and the figurative, but also gives space to the abstract, with the creation of evocative and highly emotional ceramic plates.

After a pause in which the artist was involved in construction work, his artistic career resumed in 2010 with his first exhibition "Art with ... clay", at the "Circolo degli Artisti", in Albissola Marina, in collaboration with his colleague and friend Giorgio Venturino; the same year the artist exhibited "Christmas with open doors in the Sistine Chapel", in Savona with the artist Aurelia Trapani with whom he will present "A Nativity in the pool", at the municipal swimming pool dedicated to Paolo Zanelli in 2011.

In 2012, in anticipation of the London Olympic Games, Giallombardo was present in the "Casa Italia" of CONI, together with the ceramics of other Italian artists, with a large polychrome panel entitled "When sport becomes art", created at the "Studio Ernan ”, of Albisola Superiore. In December 2014, Giallombardo donated ceramic spheres containing a representation of the Nativity to the representatives in Savona of all the Forces of the Order and a large Nativity scene in the Sistine Chapel. In 2016 the artist donated a large Nativity Scene to the Prefecture of Savona.

In 2017 the artist donated the work "The Value of a Memory" commemorating the Fallen of the "Acqui" division to the municipality of Monastero Bormida.

In 2020 he donates a permanent nativity scene to the State Police of Savona; in the same year he received the honor of knight of the Order "Al Merito della Repubblica Italiana".